PARNU, ESTONIA. Enno Kuusmets is a sturdy Estonian who at age 77 has experienced tough times. 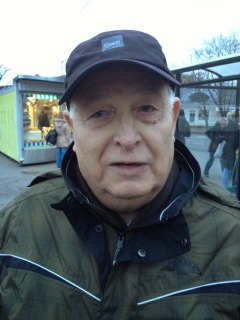 Born four years before the Soviets took over in 1940, his homeland in southeast Estonia was soon occupied by the invading Germans. His father was forced into the Wehrmacht. Enno remembers soldiers digging trenches in his yard as the Germans retreated from the siege of Leningrad.

The conquering Soviets punished Enno’s father with ten-years in a Siberian work camp. His health ruined by privation, he died two years after returning home in 1955. Finishing high school that same year, Enno’s family couldn’t afford bus fare for the 50-mile journey to Tartu for university entrance exams. His alternative was three years in the Red Army. Later he studied economics and moved to Parnu on the Gulf of Riga, one of four urban centers in Estonia.

“The worst times were in1960,” Enno recalls. Newly married, he remembers, “sugar was in short supply, the lines stretched for on for one kilometer and you waited all day for a ration.” Pay on the collective farm where he drove a truck was 50 kopeks per day. His family farmed a small plot and was allowed 20 chickens, one pig and one cow.

Times were good in the 1980s, he says, until the failed reforms under Gorbachev triggered hyperinflation. “1991,” says Enno, “was a fateful year for me. I lost my wife and then I lost my money,” his ruble savings having become worthless.

Enno Kuusmets today lives in a two-room flat in a squat rundown building in the distant outskirts of Parnu. He survives on a pension of € 360 per month. That’s enough to get by but after paying for electricity, water, building fees, taxes and cable television he has about € 225 for food, bus fare and other expenses. He’s not able to save money to visit his son, a shopkeeper in Tartu. A diabetic, Enno suffered a four-month bout of pneumonia last winter. 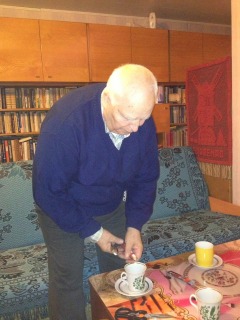 Enno in his Parnu apartment

Since regaining its independence in 1991 Estonia has been a post-communist success story. Its open economy produced the programmers who partnered with Swedish investors to develop Skype, which under Microsoft still has a major facility in Tallinn. Estonia has a market friendly flat tax and the country has embraced information technology in ways few European countries have. Geopolitically Estonia is anchored in Europe and is a member of the European Union, and since 2011 the euro currency zone.

Enno Kuusmets is not complaining and savors Estonian independence. But he worries about young people as well as his elderly neighbors. Estonia is losing population and educated young people are the ones leaving in greatest numbers.

This county is the size of New Hampshire and Vermont combined but has less than 1.3 million people. In the five years since the 2008 economic crisis about 30,000 people emigrated from Estonia. While a small number, it is equal to over 2% of Estonia’s population. Most young people go to Finland, Britain and even Australia to find greater opportunity and higher incomes. Neighboring Finland is the preferred destination as its language is similar to Estonian and Finnish salaries are typically three to four times higher. The average monthly wage in Finland is € 3,200 compared to € 800 in Estonia.

Medicine and health care are severely impacted by emigration. In a nation with this low a population losing even five specialist doctors is a large problem. Estonia typically certifies about 150 new nurses each year. But in both 2010 and 2011, according to the ministry of social affairs, more nurses emigrated than graduated from nursing schools. 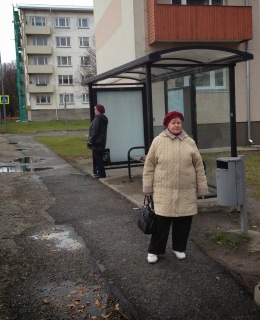 Parnu, waiting for a bus outside typical dwellings

Some analysts challenge the assertion that emigration of the skilled and young is a problem. Rather, they say, the open labor markets within the European Union are positive as Estonians not only send remittances home but return with fresh skills. But make no mistake, times are tough in Estonia and not only for the elderly. Economic growth this year will be no more than 1.5%. The economy is not producing enough jobs and the 20 % youth unemployment rate is misleading because so many young job seekers have left the country.

Enno’s pension is generous compared to what is paid in the neighboring Baltic States of Latvia and Lithuania. But it is well below the € 800 to € 1,000 the European Union pays each month for the living expenses of university students participating in its Erasmus exchange program in member countries. #