CAPE TOWN, SOUTH AFRICA The 65-mile Argus bicycle tour has been an annual fixture in Cape Town since 1978. A charity event run in part by the local Rotary Club, the Argus has evolved into the world’s biggest timed bicycle race.

This year’s event on March 9th drew 35,000 cyclists, 90% of whom were South African. This year’s winners completed the scenic circuit winding around Table Mountain between the Atlantic and Indian oceans in less than 2 hours and 51 minutes. Riders battled the stiffest winds in five years that made climbing perilous with a risk of being blown over.

Despite adversity 90% of entrants—only a fraction of which are professionals—finished the race, with most getting around the course in under 6 hours. About 20% of the riders were black, and somewhat over 30% women. The oldest riders were in their 80s and the youngest not yet teenagers.

Tour director David Bellairs said the 30 mph gusts actually made the race safer. “The wind slowed people down,” he said, “it almost seemed to reduce the number of crashes.” The three medical helicopters constantly overhead took only 59 riders to hospital, most of them with fractures.

Noting the growing popularity of cycling, Johannesburg rider Craig Leithwhite says, “cycling is the new golf.” People, he says, want to be fit and test themselves. Most riders train many months for the Argus and come back year after year. The Argus is big business for Cape Town, South Africa’s most prosperous city. Alan Winde of the Western Cape Tourist authority says the bike race brings $50 million into the local economy.

As it has exploded in popularity, cycling has become expensive. The cheapest bikes on display in the exhibit hall where riders checked in for race numbers and electronic chips cost $2,500. 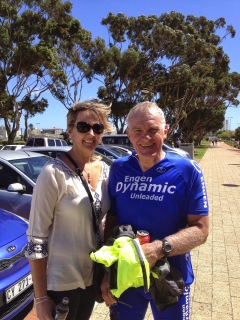 The one-day event over, riders already are turning their attention to next year’s race. Businessman Duncan Bell, 69, finishing his 20th Argus, is hopeful that in 2015 he’ll improve on this year’s time of 4 hour 20 minutes. #