Skip to content
WASHINGTON: On the sidelines of a conference in Vienna on September 22d, South Africa signed an agreement for Russian nuclear power plants to be built in the country. The deal could be worth $50billion. 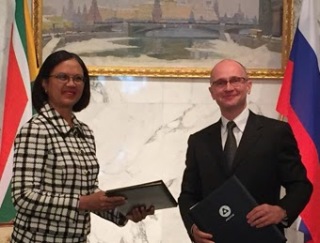 Signing ceremony in Vienna: South African Energy Minister Tina Joemat-Pettersson and Rosatom CEO Sergei Kirienko (photo: Rosatom)
Assuming the deal goes forward, they would be the first Russian nuclear reactors in Africa, joining the continent’s sole nuclear facility, the French-built Koeberg power station near Cape Town.
South Africa badly needs additional generating capacity. Its power grid is overstretched and rolling brown outs have become common. The African National Congress (ANC) government has long favored additional nuclear plants to augment coal-fired facilities. The Russians would build eight VVER reactors with a combined output of 9.6 giga watts by 2030. It would be one of South Africa’s biggest infrastructure projects.
The opposition Democratic Alliance is calling for details of the strategic partnership agreement to be made public. The South African energy department says the accord is preliminary and that constitutionally mandated procurement procedures will be followed.
With the government having a history of shady business transactions, the Russian nuclear deal has set off alarm bells in the South African media. Commentators are calling attention to President Jacob Zuma’s surprise five-day visit to Russia last month, for which no official program was released.  It is known that Zuma met with President Vladimir Putin but it is not known if the nuclear framework was discussed.
Zuma is already under fire for financial irregularities in a $20 million upgrade to his private residence.  In 1999, long before he became president, there were charges of kickbacks to ANC officials– including Zuma—as part of a $5 billion arms deal with Sweden.
Following the ANC’s victory in last May’s parliamentary election, Zuma reshuffled his cabinet, surprising analysts by elevating his lightly regarded agriculture and fisheries minister, Tina Joemat-Pettersson to the energy portfolio. Last year Ms. Joemat-Pettersson, a communist from Kimberly in the Northern Cape, was investigated for unethical conduct after awarding a fisheries contract to a company  inked to the ANC but with  no experience in commercial fishing. She turned aside opposition calls to resign.
At the signing ceremony in Vienna, Ms. Joemat-Pettersson said the accord “opens the door for South Africa to access Russian technology, funding and infrastructure.”
By signing with Rosatom, South Africa is ignoring the punitive sanctions levied against Russia by Europe, America and Japan to protest Moscow’s intervention in Ukraine. While in Washington in early August for President Obama’s African Leaders Summit, Mr. Zuma called for increased US investment in South Africa.  The Westinghouse unit of Japan’s Toshiba, as well as French and Chinese firms, have wanted to build nuclear plants in South Africa, but analysts say the Russian technology is cheaper.
South Africa is the leading beneficiary of AGOA, the African Growth and Opportunities Act, that allows most African products duty-free entry into the US market.