Palm Springs, CA. The wind that was so strong Friday was unchanged Saturday. I resolved not to continue in such adverse conditions.

With the perilous ride of the previous day in mind, I needed a plan B and it emerged overnight.  Could I rent a car in Palm Springs and transport the bike the 90-plus-miles to Blythe on the Arizona border, return the car to Palm Springs, and then take a bus back to Blythe?

At 9:00 Saturday morning I bid farewell to my wonderful hosts, George and Hazel Palmer, and rode from Cathedral City to the Palm Springs airport. I rented a van, loaded the bike, and departed for Blythe.

It was a curious feeling driving a route that I intended to cycle. The nine-mile climb east from Indio looked much tougher than I remembered and I wondered if I would have made it with an 8 to 10-mile per hour wind blowing. But the more serious problem would have been the absence of motels for 80-miles.

Arriving at the Chiriaco Summit 30-miles from Indio, the surroundings were bleak. There was a gas station, store and the General Patton Museum that attracted a few visitors.  It was here in the low desert in 1942 that Patton trained thousands of soldiers for the invasion of North Africa. Strolling towards the Patton statue a heavy gust came up, leaving no doubt that this was not a day to be on a bicycle. 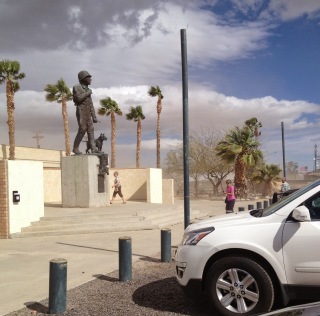 At Chiriaco a cyclist would find food, drink and a ‘dry’ campsite but no motel. Worse, there is nothing beyond Chiriaco until Blythe 70-miles away.  I stopped at Desert Center 20-miles farther on, which is a ghost town, its gas station and cafe boarded up. There was a picnic table where a cyclist might sleep, provided he had warm clothing and a sleeping bag.

By now I was certain that my journey would have ended ignominously had I cycled out from Indio. Quite literally I had been saved by the wind.
Arriving in Blythe I located the the gas station where the Greyhounds come in, booked a room for Sunday night, and put the Cannondale in the motel store room.  I accepted the Palmers’ gracious invitation to spend a second night with them after returning the car to the Palm Springs airport.  George Palmer, a navigator on RAF bombers in World War II, recently celebrated his 90th birthday. In the 1970s he was the editor of the Financial Mail in Johannesburg and hired me for my first job in journalism.  I owe much to Hazel and George. 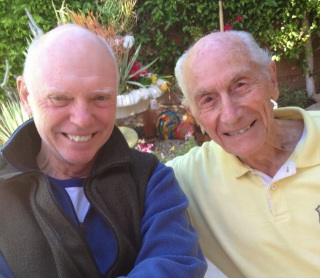 One thought on “Saved by the Wind, Plan B”