Skip to content
OMAHA: As usual the Warren Buffett and Charlie Munger show played to thousands of the faithful at Omaha’s main sports arena.  The day-long Saturday session was chock full of jokes and wisdom for investors.
This 50th annual meeting (my fifth) was noteworthy for the principals pronouncements on the euro currency and China. 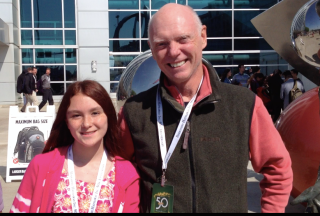 The Young and Not So Young in Omaha
There have always been questions about the euro but this time both Charlie and Warren were more skeptical, arguing that changes are required for the system to be viable. Munger said the € has done well, but the flaws must be addressed.  “They created something that is unwise,” he said,  “they’ve got countries in there that shouldn’t be there.” Obviously referring to Greece, he said in his inimitable way,“you can’t do business with your drunken brother.”
He complained that Greece had submitted false statements (assisted by a US investment bank) to get into the system.  The Europeans, said Munger, have to face up to the system’s flaws. Surprisingly, Buffett chimed in saying, “in its present form it’s not going to work.”  Combined, this is a stronger critique than had been voiced at earlier meetings.
Munger was ecstatic about what China has achieved in boosting living standards. it’s “totally miraculous” what the country has done so far. “I would have not believed a country of that size could move so far, so fast.”
The 91-year-old Munger believes President Xi Jinping is consciously modeling the successes of Lee Kuan Yew’s Singapore, rooting out corruption, even putting some of his friends in jail. Munger sounded almost like a member of China’s politburo, saying “they’ve found a way to unlock the potential of their people.”
Buffett agreed, saying it is amazing what China has done. “It blows me away,” he said. “As Charlie says, China and the US are going to be the superpowers for as far as the eye can see.” He said despite inevitable conflicts China and the US have to find a way to work together.
There was, of course, the usual wit. They said,”we think that any company that employs an economist has one employee too many.”
Munger had this observation about Germany: “Germans work fewer hours than a lot of people and produce a lot more.”
Buffett corrected a questioner who asked about his giving away 90% of his enormous wealth. Actually, said Warren, “I’m giving away 99%.”  Most of those billions go to the Bill and Melinda Gates Foundation. Buffett quipped, “there’s no Forbes 400 in the graveyard.”
The weather was super, springtime in Omaha.  And the show goes on as neither Warren nor Charlie gave any hint of stepping down.