Skip to content
RYBACHY (Kaliningrad), Russia: The 80-kilometer long finger of sand that curls along the Baltic Sea coast in Lithuania and Russia is wild and undeveloped. A closed military zone during 50 years of communism, the Curonian Spit and its shallow lagoon are key navigation points for hundreds of thousands of migrating birds who each year move through this great north European flyway.
The Russian scientists at Bio Station Rybachy, midway along the spit, in November marked the 150th birthday of Johann Thienemann, the bird observatory’s German founder. Thienemann was the first ornithologist to ring birds as a means of studying their migration patterns. 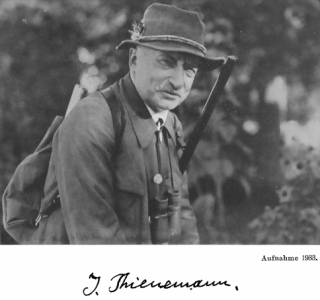 Thienemann, age 70, in field gear
A preacher’s son from Thuringia, Thienemann came to the remote stretch of East Prussia in 1896.  During his visit he observed more migrating birds than he ever imagined.  Returning home, he obtained high-level approval and funding. He came back to the Curonian Spit and in 1901 established the world’s first bird watching station.
Thienemann headed the research center for 30 years, living the rest of his life on the spit, where he died in 1938. He was born November 12, 1863.
When the illustrious scientist Alexander von Humboldt visited the dune in the mid-19th century he called it,  “one of the world’s most remarkable natural attractions.”  Others described it as Europe’s Sahara. The shifting dunes, blown by sea winds, are in places five-kilometers wide. The Curonian Spit was declared a World Heritage Site in 2000. 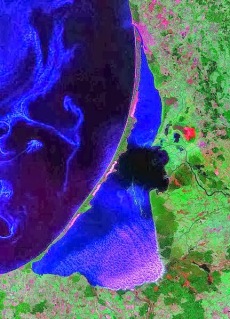 What Thienemann had discovered was the principal route for migrating birds traveling from as far away as the Black Sea and Africa. Bird migration routes hug coastlines and the spit’s wide, peaceful lagoon is a bountiful way station.  During peak spring and autumn migration times as many as one thousand birds fly along the spit each day.
The first birds Thienemann banded were black-headed sea gulls. Ringing had been devised sometime earlier by a Danish ornithologist, but it was Thienemann who put it into practice.  An estimated one million mostly small birds were banded at his station prior to the Second World War.
The epic battles in 1945 between the German and Soviet armies in East Prussia halted work at the research station and marked the end of seven centuries of German sovereignty. The Soviet Union obtained much of East Prussia as war booty. After two and a half million Germans fled or were expelled, Stalin systematically sought to expunge all evidence of German presence and the territory was repopulated with Russians.
In the mid-1950s, Arctic ornithologist Lev Belopolsky from Leningrad was allowed reestablish the bird observatory. It remains today the biological station of the Zoological Institute of the Russian Academy of Science. The PhD researchers at the site carry on the work started by Thienemann.
My host at the station was Dr. Andrey Mukhin who shares his time between Rybachy and Kaliningrad University. He showed me the fine, almost invisible mist nets placed in the reeds close to the water. We retrieved for banding a male goldcrest, typical of the small migrating birds that fly by night and feed during the day.  Mukhin and his colleagues’ research is focused on magnetic fields, seeking an explanation to the still unanswered question of how birds navigate. 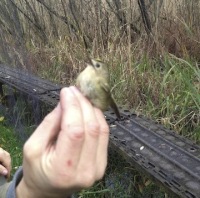 One study conducted at the station found that young storks held back two months from the departure of their flock still managed to find their way to rejoin others near the Black Sea more than 1,000 miles to the south.
Like most German graves in the territory, Thienemann’s was desecrated in the savage aftermath of war. The Russian scientists located his burial place in the wooded German cemetery and a new tombstone matching the original was placed over the grave.

The village of Rybachy (formerly Rositten) is neglected and forlorn. Thienemann’s home is still lived in but in need of renovation.

Thienemann’s home
Despite its rundown condition and shortage of funding, the bird watching station that Thienemann created still functions and welcomes international collaboration. The scientific work continues.
If anything the natural beauty and wildlife of the Curonian Spit are even more spectacular now than during Thienemann’s time.   Fifty years of isolation works wonders.  The moose and elk herds have expanded.  There are large populations of foxes and wild boars.  And of course the birds still come in vast numbers, flying north and south with the seasons. #