For the first time in a decade there is optimism in Detroit. Not only is the blighted city slowly beginning a turn around, the industry that gave it life is restructured and fit, having climbed back from near collapse in 2009. In 2013 US brands accounted for 46% of domestic sales, outselling their Japanese, Korean and German competitors. 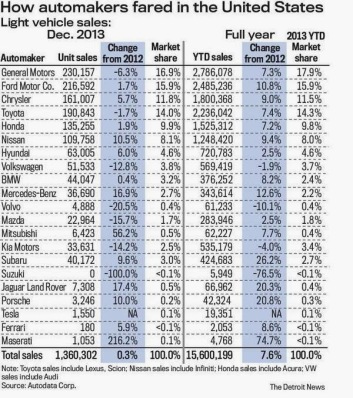 Light vehicle sales climbed to 15.6 million, the highest level in six years. A resurgent General Motors held top place with an 18% market share. Ford followed with 16% and Chrysler had 12%. Toyota and Honda led the Asians with 14% and 10% shares respectively. The Detroit 3 outpaced the competition with sales gains of over 9%.

For the Detroit Three the watchwords in 2014 are change and transition. From January 15,th General Motors will be headed by an engineer, Mary Barra, who will be the first female CEO of a global car company. She has spent over 30 years moving through the ranks at GM. 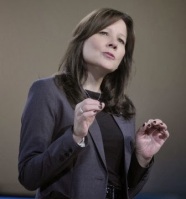 With the Treasury having sold its remaining shares in GM in December, the chapter on the $80 billion bailout of GM and Chrysler is closed. GM is no longer ‘government motors.’ Ford, which sold assets and mortgaged its future to avoid bankruptcy, is keeping its management team in place.

Alan Mulally, 68, the former CEO of Boeing Commercial Airplanes, has led Ford since 2006 and presided over its revival. On Tuesday Mulally ended months of speculation that he would take the top job at Microsoft and said he would remain at Ford until the end of 2014.

Big news came to Chrysler on New Year’s Day when Sergio Marchionne sealed a deal that gives Fiat outright ownership of the US firm. Marchionne, who grew up in Canada, heads both companies. He is credited with bringing the struggling US company back from near death. Fiat is paying $4.3 billion for the Chrysler shares owned by the healthcare trust of the United Auto Workers that the union received at the time of the bankruptcy. Incredibly, with newly profitable Chrysler providing much of the cash, Fiat’s payment is a mere 10% of the $38 billion Germany’s Daimler paid for Chrysler in 1998.

Analysts expect the auto industry recovery to persist as the market is benefiting from low interest rates, longer-term loans, and rebounding consumer confidence. Edmunds consultancy predicts 2014 sales of over 16 million, only one million units below the year 2000 sales record. Kristin Dziczek, a specialist at the Center for Automotive Research in Ann Arbor, says the post-great recession US auto industry is now highly competitive versus all global rivals.

It is also much smaller. The US based auto industry is 35% smaller than ten years ago. Where it used to employ 1 million people today it is 650,000. In Michigan auto industry employment is down 50% in ten years even as over 100,000 jobs have been added since 2009.

Wages are also lower as new hires earn about $15 per hour, half the level of a decade earlier. However, the booming sales of 2013 have set the table for record profit sharing. In the next few months an estimated 130,000 unionized workers are likely to receive per person bonuses of up to $12,000.