MILAN, OHIO: There are surprises when visiting Thomas Edison’s birthplace in northern Ohio. The great inventor was born in this pleasant village between Cleveland Toledo in 1847, the 7th and youngest child in a family with roots in Canada. The Edisons’ sturdy two-story brick home was a cut above the neighbors, revealing their relative prosperity. Thomas’s father made roofing shingles. A further surprise is that Milan (MY-lan)—eight miles from Lake Erie—was a busy canal port in the 1840s until the railroad arrived bypassing the town and stealing its grain trade. Today Milan has no canal and no boats. 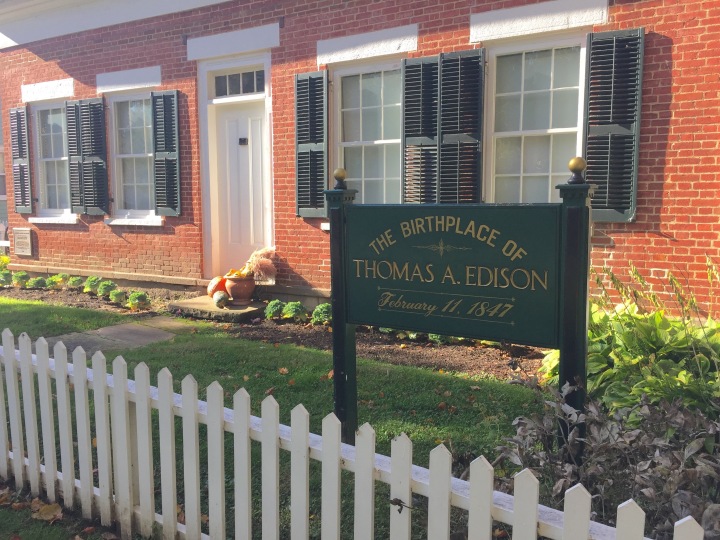 When Edison made his final visit to Milan 1923 he recalled that as a boy he saw prairie schooners—Calistoga wagons— outside his home. They were assembling in Milan for the months-long cross-country trek, pioneer families lured west by the discovery of gold in California 1849.

With Milan’s grain trade collapsing, Edison’s entrepreneurial father moved the family nearly two-hundred miles north to Port Huron in Michigan just across the St. Clair River from Canada. Thomas grew up in Port Huron, home schooled by his mother, while his father pursued carpentry and farming.

Thomas Edison had no more than a few months of formalized education. His education was the task of his mother who drilled the boy daily on a variety of subjects. By age 12 Edison went to work selling snacks and newspapers on the daily Grand Trunk train linking Port Huron with Detroit. He attributed much of his deafness to a railroad conductor who cuffed his ears after he inadvertently started a fire in the mail car. 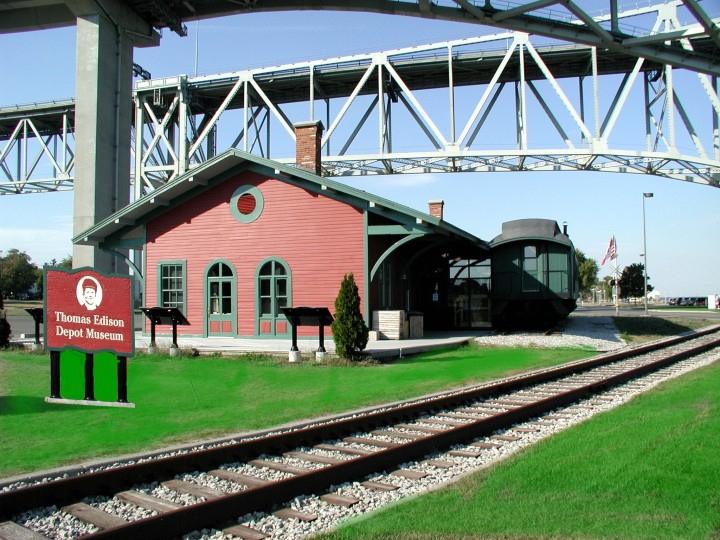 Edison left home at 15 in 1862 becoming a vagabond telegrapher, the equivalent of a computer coder today. If you could do Morse code you were assured of steady work. Always dabbling and making things, the itinerant Edison lived in Cincinnati, St. Louis and New York. His passion was invention and after finding sponsors he set up a workshop in Menlo Park, NJ near New York City.

The museum in Milan displays one of Edison’s first inventions, a primitive recording device from 1877. At the time he was also at working on a long-lasting electric light bulb that was unveiled in 1880. Over six decades of toil Edison registered over 2,300 patents.

Edison was a shameless self-promoter, aware that with rivals on his heels he required publicity to be taken seriously. He drove himself and his workers hard, his motto, “genius is one percent inspiration and ninety-nine percent perspiration.” By 1882 Edison was famous and respected. He had invented the phonograph, rivaled Bell on telephones and built a power plant to light parts of New York City.

Back in Michigan another tinkerer 16-years younger than Edison was thinking about horseless carriages. In 1893 Henry Ford went to work as chief engineer at Detroit’s Edison Lighting Company. Five years later he met Edison and told the older man that he hoped to develop a motorized carriage. Ford was inspired by Edison’s encouragement to “keep at it.”

Later when Ford was rich and famous the two men became friends. They built winter homes near one another in Ft. Meyers, Florida and together with rubber baron Harvey Firestone and naturalist John Burroughs went on summer camping trips.

Edison (left) and Ford on vacation in the 1920s

In 1929, two years before his death, Edison came to Dearborn outside Detroit for the dedication of the Thomas Edison Institute. The event marked the 50th anniversary of Edison’s invention of the incandescent light bulb. Ford was in the midst of building Greenfield Village, a museum of American achievement, which opened in 1933. Edison’s lab in New Jersey was brought to Michigan for preservation and remains open to the public.

Henry Ford’s vision of preserving important Americana by bringing things to Dearborn remains controversial. Dayton would surely prefer that the Wright brothers bicycle shop be in their city instead of Michigan. But a visit to Greenfield Village is a must for Edison enthusiasts. Not only has Edison’s lab been meticulously reconstructed but there’s also the Detroit power plant that provides useful basic information about electrical generation.

Citizens of Milan successfully resisted Henry Ford’s insistence that the Edison birthplace be moved to Dearborn. For local tourism that’s a plus as the Edison home is Milan’s prime attraction.

Electric vehicle and space exploration entrepreneur Elon Musk is an admirer of Edison. It won’t be a surprise if at some point Musk brings his growing children to Michigan and Ohio to view the fabulous achievements of a predecessor, Thomas Alva Edison. #