BRADENTON, FLORIDA:  Bob Blanchard, who will soon be 79, is about to ride his heavily laden Trek to Key West.  He expects the 475-mile trip to take ten days, averaging about 50 miles per day.  The most direct route would be 100 miles shorter but, as always, Bob will be doing things his way.

Waiting for his scrambled eggs to arrive, Bob scarfs down a fistful of vitamins, a daily dose that he believes keeps him healthy.  He takes no  medication and has excellent blood pressure. He has a heart monitor strapped across his chest and reads the results on a fitbit wrist watch. Typically carrying up to 90 pounds of cargo, his heart rate reaches 150 on hard climbs.  For the Key West trip from his home in Bradenton he will tow a trailer that contains a tent, sleeping bags and other essentials.  Much of the weight comes from a large tool kit.  Bob built the wheel rims and much else on his customized bike. 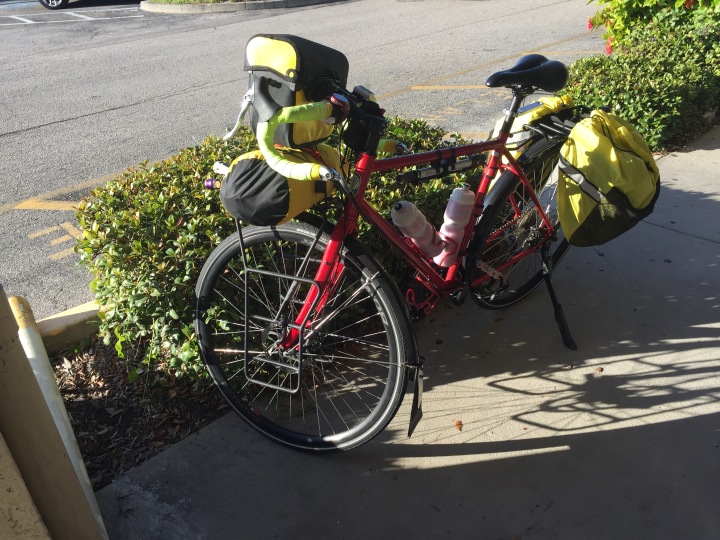 Originally from Marysville, a suburb of Port Huron, Michigan, Bob has been four and a half times across the country. His best memory is a 35-mile climb in the Rockies, “with the best scenery I’ve ever witnessed.”  He has no time for foreign travel and chastises editors of Adventure Cycling magazine for their proliferation of foreign rides,  saying they should “stay at home where they belong.”

His career was in construction.  It was in 1980 that Bob Blanchard decided to change his life and move past his daily routine of cigarettes and excessive food that ballooned his weight 50 pounds above what it is now.  He has been married five times, recalling one episode in which he and a wife set out across the country on a tandem.  “Let me tell you,” he says with emphasis, “on a tandem you’re going to find out real quick if you’re compatible.”  In this case, they weren’t.

Since 2000 Bob Blanchard has ridden just under 150,000 miles and he has the exact number stenciled on the cross bar of his Trek.

Bob is comfortable cycling alone, with one or two companions, or in a large group.  He does lament a group ride that included a woman who said she averaged 10 to 12 miles per hour but in fact did only three to five. “She was always one hour behind and by the end of the first week she got the message and dropped out.”

His typical day is setting out at dawn and being done by one or two p.m. He always wears easy to see bright clothing, has his flashing red tail light on all the time, and has no sympathy for reckless cyclists who ride side by side on busy highways.  Luckily he has not been involved in serious accidents.  He has endured knee surgery and worries that his hip will soon require attention.

So, what’s Bob Blanchard’s take on the state of the country as seen from his bike seat and the hundreds of people he meets? “We’re in bad shape,” he says, “and it’s not going to change.” Referring to illegal immigration, “Trump is seen as changing course too radically. He’s trying to do quickly what previous presidents should have slowly set in motion.”  All in all, he gives Trump a passing grade, “although it’s pretty obvious he’s a crook. But aren’t they all?”