Peoria, AZ.  Brian Lamb, the founder of C-SPAN, says he has learned in his long career that people want choices.  Certainly that is evident in cycling.

Among the delights of Wickenburg, 66 miles nort of Phoenix, was connecting with a dozen or so touring cyclists who had come up from Tucson in the southern part of the state. They had ended their ride for the day and some were gathered in a motel parking lot around the trailers that carried their baggage and equipment.

The group was in the midst of a week-long ride organized by Pacific Atlantic Cycling (PAC Tour) in Tucson. They were serious cyclists who were expected to ride 60 to 90 miles per day and maintain a speed of 16 to 20 mph. This particular ride, the Cactus Classic, begins and ends in Tucson and includes a long journey in the low desert north as far as Wickenburg.  The cost of the ride was $1145, including double occupancy accommodation, two meals a day, and support. http://www.pactour.com
Lon Haldeman, PAC Tours founder, is a champion rider who has crossed the country by bike many times. He sees bicycle touring as steadily but slowly gaining popularity. 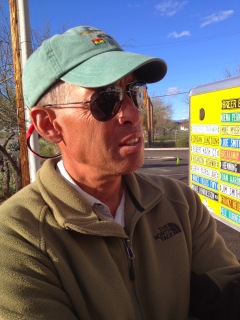 The Cactus Tour is quite a different undertaking from mine and reflects the choices available. In Wickenburg, which is on the Adventure Cycling southern tier US route, I saw smaller groups of two to four cyclists plus two travelers on recumbents. On my ride from Long Beach I did not encounter other individual cyclists, but I know they’re out there.
The ride south on route 60 towards Phoenix was straight forward and enjoyable. The shoulder was wide and the weather sunny without wind.  The temperature did not rise above the high 50s.
With luck, I’ll reach my destination of Tempe on Thursday. Wednesday’s ride was a manageable 36-miles.