Tempe, AZ. It is a circuitous, enjoyable ride along the Arizona Canal Bike Path across the 50-mile wide expanse of metropolitan Phoenix.  To reach the canal from highway 60 a rider sees the dramatic transition from scrub desert sand to fashionable neighborhoods with irrigated lawns. 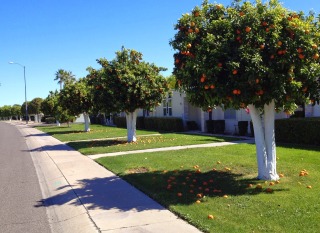 The trail is often hard to follow as signs and arrows are in short supply. It winds north past a new sports complex shared during spring training by the San Diego Padres and Seattle Mariners. 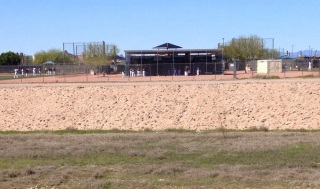 Eventually the trail passes the Wrigley Mansion and the Arizona Biltmore resort, both of which were constructed in 1929. Near the path is Camelback Mountain and beyond it Frank Lloyd Wright’s Taliesin West.
My nine-day journey began and ended with rides on canals. While those in Long Beach, Santa Ana and Phoenix can’t compare in beauty and efficiency with Washington’s Capital Crescent Trail along the Potomac, they are wonderful for riders. 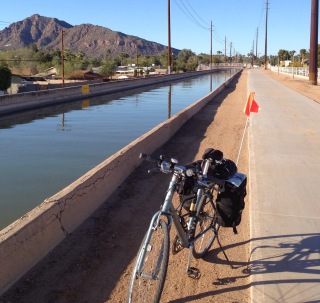 In Scottsdale, meeting four riders who were clearly traveling for distance, I called out, “where are you headed?” An answer came from a petite woman in green, “San Diego.” My reply: “I’ve come from L.A.”  As I rode on, I thought often about this gratifying exchange between east and westbound riders that lasted all of five seconds.
My ride ended in the university town of Tempe that is close to the Phoenix airport. It had been a satisfying adventure in which I rode 347-miles, including 39-miles the final day. The journey was without incident, not even a flat tire. Physically things were equally good. No aches or infirmities.  However, I’m certain the result would have been different had I continued into the wind that buffetted my approach to Palm Springs.  Similarly, the journey would have ended in failure and perhaps disaster had I attempted to cross the 90-mile stretch of desert from Indio to Blythe where there are no facilities.
What have I learned? I’m not sure beyond the obvious that ours is a big and diverse country inhabited by people who basically are friendly and seek to be helpful. Personally, I think I’ve added balance to my life and gained the confidence that comes from achieving at 71 something that is physically strenuous and challenging.
I thank my readers for their interest and concern.