HONG KONG:  I took the Chinese authorities at face value when they added Guangzhou to a list of cities where visas are not required for visits of less than 72 hours.

Accordingly, I booked a ticket for the four-hour Japan Airlines flight from Tokyo to Guangzhou and then a return to Tokyo from Hong Kong in the special administrative region 80 miles to the south.  I would travel by train from Guangzhou to Hong Kong and be in China proper for only 48 hours.

Trouble came at Tokyo’s Haneda airport when a young JAL agent asked for a further look at my passport as I stood in line to board the flight. Without a Chinese visa, I was told, I couldn’t board the plane.  My explanation that a visa wasn’t required for a brief stay went nowhere.  Several phone calls changed nothing. The flight departed without me.

Thoughtfully, JAL put me on a flight to Hong Kong that was leaving within the hour from the next gate. At least I was moving in the right direction.

In Hong Kong JAL personnel were helpful, suggesting that I take a bus to the border at Shenzhen and get a visa there. They cautioned however that the process often takes two days. My appointment in Guangzhou was in seven hours. Was there any chance of making it?

Ten minutes and $10 later I was aboard a bus to Shenzhen. No one spoke English. At the border we got off, retrieved our luggage, and walked to the customs and immigration building. There were thousands of people and dozens of buses.  Processed out of Hong Kong we rejoined the bus and reached Chinese border control. Out we went again joining the multitude waiting in several long lines.  I was directed off to the side where visas were issued. Filling out the application, I was delighted that it appeared I was going to get a visa.  Ten minutes later I paid the equivalent of $145 and was issued a one-day, one city visa. Then it was back to what was a much longer queue at immigration.

60 minutes after arriving at the border I emerged on the Chinese side unsure as to what to do next.  My bus, I was sure, was long gone. Walking towards the chaotic parking lot a rough-looking man approached, grabbed hold of my roll aboard, and motioned for me to follow. He spoke no English, thus making my query as to who he was meaningless. He did point to a round sticker on my vest that must have been put there by the bus company.  I wasn’t even aware of the sticker but this tenuous connection did provide some security that I was not being robbed.  We reached the man’s untidy cab and ten minutes later we pulled into the lot of a downtown hotel where the driver was obviously known.

At this point I showed the driver on my as yet unconnected phone the number of my contact in Guangzhou. Could he please call her on his phone? He did and thereafter things moved forward. I was told by the woman at Fedex in Guangzhou that the driver could deliver me to my hotel and that the journey would take two to three hours. What wasn’t mentioned was cost. This resulted in several minutes of gesturing, counting of cash, and punching of numbers on the screens of our phones. He was using Chinese yuan, I dollars and even Japanese yen, the only notes I possessed. Finally, we seemed to agree on 1,000 yuan plus $40 US. That total, I concluded, was about $170.

We set out. It was 4:30 p.m. My appointment to tour the Fedex Asia Pacific sorting hub in Guangzhou was at 10:30 p.m. For the first time since Tokyo I dared to hope I might actually make it.

Of course, I knew nothing about my driver—his name, whether he was legitimate or could be trusted. There was nothing on or in the car that identified this well-worn Toyota as a taxi. There was no photo or company ID. Snaking through Shenzhen traffic we came to a Bank of China building. I was right as to why we were there. He motioned for me to go inside, obviously to get money. My lone piece of luggage in his trunk, I walked through a knot of people, entered the building, and found three ATMs against the wall. All the while I’m trying to remember the yuan-US dollar exchange rate. Was it six, seven, eight?

Amazingly the ATM had a language option but of course there was nothing about the exchange rate. I took a chance and selected 1,000 yuan since that was a number the driver repeatedly keyed in on his phone.  There had been no ATMs at the border. I was amazed my card was accepted. Returning to the car I took a chance and asked a passerby if he knew the exchange rate. I thought he said 7.5. If so I had withdrawn about $130 in 100 yuan notes with Chairman Mao on the front. The driver took it all and then asked for the three US 20s that I had shown him earlier.  He was unfailingly polite.

We traveled on the Guangzhou highway for about two hours. It was a limited access toll road, the traffic a mix of trucks and cars, busy but without gridlock.  We proceeded through mostly built up areas but also occasional green hills and forests. It wasn’t the uninterrupted wall to wall skyscrapers I had expected south China to be. Towns and cities were clearly discernible, Donguan, something else and finally Guangzhou. Drivers were mostly courteous although fast cars—Mercedes, BMWs and some Teslas– often passed on the right.  At 8:30 p.m. we pulled up at the Pullman Hotel, which like the nearby Baiyun airport was ultra-modern.

For the last hour of the journey my mind was occupied by questions of money.  I knew I had paid too much.  But how would I request a refund from someone who spoke no English? I resolved that $40 US should be returned but I would settle for $20. With the hotel doorman standing next to our idling vehicle, I keyed $40 onto my screen and gestured towards the glove box where he had put the cash.   There was an awkward silence with the driver grasping the shoulders of his shirt, a clear message that he was tired from the long drive. I was unmoved. Finally, he opened the glove box, handed me a $20 bill and gave me one more of the tally sheets that provided some legitimacy to the transaction. Satisfied, I got out, retrieved my bag and he was gone.  Inside the luxurious hotel, I checked in, went to my room and got 30 minutes of sleep before being met in the lobby and taken to the Fedex sorting facility, the sole reason I had come to Guangzhou.

Morning brought a warm and sunny new day. Refreshed, perusing the China Daily newspaper while enjoying a superb breakfast buffet, I felt satisfied. I had won against adversity, accomplished what I set out to do.

I was delighted that thrown a curve ball nonetheless things worked out. I was also delighted to witness the enormous prosperity that has occurred in Guangzhou.

Now all I had to do was to get back to Shenzhen before time ran out on my 24-hour visa. Advised at the hotel that one is asked to present a passport when buying a train ticket, I resolved to travel by bus.   At noon I stood in front of the magnificent Pullman Hotel, waiting for the taxi that would take me to the Guangzhou bus station. 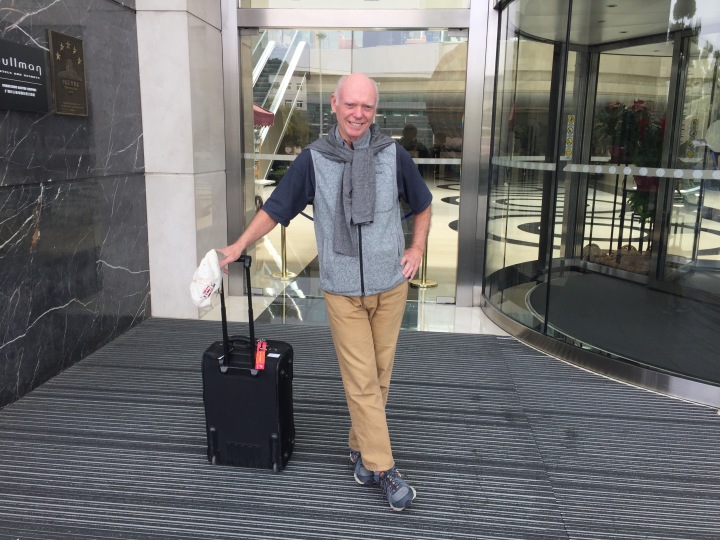 Mine is a story with a happy ending. The bus trip back to the border was fine. There were no problems getting through passport control and the Guangzhou bus delivered me to near my hotel in Hong Kong.

Beyond that Japan Airlines reimbursed me for my travel expenses from Hong Kong to Guangzhou.

The moral of this simple tale is best stated by my contact at Fedex, “next time, get a visa.”